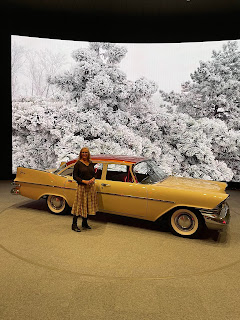 Growing up, we had some really cool cars. Our 1939 rag-top Buick Roadmaster looked like a bootlegger’s car that Al Capone might have driven. We saw the road moving beneath us through the rusted-out floorboard. Wayne, Valerie, and I stuck our heads through the holes in the top as we stood on the back seat. Dad drove down the street with three little heads popping out.

Many years later, our 1956 green-and-white Ford Fairlane often broke down, stranding us on the highway.

At the REA company picnic, she complained, “We have the oldest car here.”

While driving home later that day, Dad thumped his cigarette out the window, but it flew back into the car. Overnight, it smoldered and burned out the entire back seat. Dad pulled out the cushions, and we rode back there on the metal frame with the pungent odor of smoke for months. We smelled like burnt car everywhere we went before he found mismatched seats at a junk yard.

My dad taught me how to drive our 1959 Robin's-egg-blue Plymouth Fury with big fins and push-button controls. Sometimes the buttons would push completely through the dash board, and I would be stuck in gear. Dad kept a screwdriver handy to push through the open hole and change gears. We pulled circles around the house before he let me on the street with it.

One Sunday while I was driving out of the church parking lot, the preacher's son darted out in front me. I hit the brakes, but the pedal slid straight to the floor, only slowing the car enough for the little boy to get past.

“I tried. I don’t think the brakes work.”

Dad fixed the brakes, but I avoided that car for a long time.

Wayne's first car was a black, four-speed 1955 Plymouth Belvedere with red, rolled- and-pleated, leather interior. He let me drive it one Sunday afternoon for the traditional cruise around the Brazier Burger.

At the Brazier, everyone backed into their parking spaces so they could face the drive-through and see the parade of ’50s and ’60s muscle cars revving their V-8 engines and glass-packed mufflers. I was cool on my first go around, but on my next turn, the car stopped in the middle of the drive. I couldn’t get it cranked and stalled there blocking traffic. Wayne sat with a friend parked in another car. He jumped out and ran over. “Get out.”

When I climbed out, he slid into the driver’s seat, started the Plymouth, and drove off, leaving me standing there. I looked around at the sea of cars, wondering what to do. Then, with a purpose, I marched to the window and pretended to order a hamburger, till Wayne came back.

His next car, a white 1962 Chevy Nova, had no radio. For Christmas that year, my parents ordered one from a catalog to surprise him, but it didn't arrive till the spring.

Cousin Jimmy came over that afternoon.

"What'd you get for Christmas?” he asked.

"Well, I got socks and underwear."

Wayne opened his dresser drawer and pulled out a pair of socks.

"Those are nice." Jimmy laughed.

Ronnie McDaniel’s 1956 Pontiac convertible was the scene of a fond summer memory during my senior year in high school. On a double date, we rode around the Brazier as I lay, sunning myself on the back seat, with my head in my boyfriend David’s lap and my feet draped out the other side, since there were no seatbelts. Mother allowed Valerie and me to date our boyfriends on Sunday, in either the afternoon or the evening, but not both. Valerie chose evenings. I chose Sunday afternoons, especially in the summer, because I loved being outdoors.

That same year, we decorated for the prom at the American Legion. David met me there to help. He drove a brand-new, yellow 1967 Ford Galaxy with black leather interior. After a few hours of making roses out of tissue, it was time to go.

"Meet me at the Brazier," he said and took off.

I hopped into the Plymouth Belvedere, but it wouldn't start. I sat there for a long time before David came back looking for me.

At nineteen, I carpooled to work in Atlanta and saved enough money for a down payment on a car. Dad cosigned with me to buy a brand-new, canary-yellow 1968 MGB with black leather interior. It was the first new car in the family.

This is an excerpt from my memoir, "Highway 11," that I am editing for publication. These pages  provide an overview for the book.             Highway 11 is a swath of road between Monroe and Winder, Georgia where I grew up. “Follow the beer cans to Winder,” Uncle Perry Hugh said because no liquor was sold in Monroe, but Winder had plenty of beer joints. He and my dad frequented the beer joints of Winder or bought moonshine from the local distillers.   My dad drove to a house deep in the woods for moonshine. Down a dirt road, the house sat in a clearing. It stood on rock pilings. Dogs lounged about in the dirt yard.             “Stay in the car.” Dad slammed the door.             We three kids, ages eight, six, and four, sat in the back seat of that 1939, Buick Roadmaster convertible with the rusted out floor board. We waited while our father walked up the broken wood steps to the porch with no furniture. He disappeared inside the darkness of the open door to make
Read more

March 06, 2022
Georgia Journeys  and   Beyond Rosie  exhibits. Judy Benowitz Interview - soar.kennesaw.edu Born in Monroe, Georgia, in 1949, Judy Coker Benowitz was raised by two World War II veterans. Her mother, Ivah Ree Harris Coker, was a WAVE who served in the U.S. Navy in Washington, D.C. Her father, Daniel Coker, served in the U.S. Army, primarily in North Africa. A memoirist and actor, Benowitz discusses the ways in which she has used personal testimony and primary documents to piece ...
Read more