June 20, 2017
This is an excerpt from my memoir, "Highway 11," that I am editing for publication. These pages
provide an overview for the book.

Highway 11 is a swath of road between Monroe and Winder, Georgia where I grew up. “Follow the beer cans to Winder,” Uncle Perry Hugh said because no liquor was sold in Monroe, but Winder had plenty of beer joints. He and my dad frequented the beer joints of Winder or bought moonshine from the local distillers. My dad drove to a house deep in the woods for moonshine. Down a dirt road, the house sat in a clearing. It stood on rock pilings. Dogs lounged about in the dirt yard.
“Stay in the car.” Dad slammed the door.
We three kids, ages eight, six, and four, sat in the back seat of that 1939, Buick Roadmaster convertible with the rusted out floor board. We waited while our father walked up the broken wood steps to the porch with no furniture. He disappeared inside the darkness of the open door to make the transaction. After a few minutes, we saw little black faces peeking out. One by one, they stood in the doorway, stuck out their tongue and disappeared.
A barefoot boy came first, maybe eight years old, wearing white shorts and no shirt. Next, came a girl with braids sticking out. She wore a white dress made from a flour sack. We could tell it was once a flour sack because part of the name, Pride of Sussex, was still there though upside down, and only part of it showed. A smaller boy wearing a white shirt and shorts stepped into the doorway. The little girl came last: a two year old in another flour sack dress also stuck out her tongue and disappeared. Those kids lined up on the porch: a parade of pink tongues against black faces as our father walked down the steps with his purchase.

We called him Dan, because Mother did, even though all the church ladies said we would go to hell for calling our father by his first name.
"Never mind those busy bodies," Mother said. "You’ll have to do something much worse than that to go to hell."
Mother had a way of taking the fear out of life. Mine was a whiskey soaked upbringing, probably the reason I enjoy my martini cocktail hour today. Dan also influenced my love for the convertible. My first car was a convertible, and I drove two of them. He may have unknowingly influenced my soul searching.
Mother and Dad, my brother Wayne,
and me.
While Mother practiced the strict rules of the Southern Baptist religion by taking us kids to church, Dan sat on the couch watching Billy Graham on TV. I saw there was more than one way to find God. I converted to Judaism when I married my husband Bob.
Though Dan was a drinking man, he was also a great story teller. His could be the voice I use in my book, Highway 11. He had all the relatives laughing with his sound effects and stories of the good old days when he was a boy. Dan also told some great drinking stories. One of my favorites was when he and Uncle Perry Hugh picked up some moonshine one Saturday afternoon and had their young sons in the car with them, my brother Wayne and our cousin Jimmy. The car broke down on the side of the road. Perry Hugh and Dan got out and walked to the neighbor’s house to make a phone call. They left the two boys in the back seat of the car. The police stopped to offer their assistance when Wayne hung out the back window holding a paper sack and shouted, “Hey, Dan, you forgot your liquor."
I sat outside with Dan on a hot summer night before we had air conditioning. That paint- chipped bench rocker was the coolest place to be in the south. Under the dark, star-lit sky he sang, “Carolina Moon,” in his booming voice, way down low and then up high. I can still hear his baritone voice. He smelled of hooch and Camel cigarettes, a salty blend I will always remember.
As a baby boomer, the first generation to see world events unfold on TV, I saw blacks being beaten and hosed during integration. The three black students who integrated my school in 1965 were quietly accepted. I saw both Kennedys assassinated and watched Walter Cronkite during the Cuban Missile Crisis while the grass grew on the banks of Highway 11, until my cousin and I set fire to it.
The driver of an 18-wheeler pulled over to help us beat out the flame before it reached Winder. A few years after that I left home in my brand new MGB convertible that my dad cosigned with me against Mother’s protests.
“You have delusions of grandeur,” Mother said.
She was probably right.
My first stop was Atlanta in 1969 for the “Age of Aquarius,” where I was a hippie. During that “Peace, Love, and Rock and Roll” existence, I protested the Vietnam War along with students across the country including the “Four Dead in Ohio,” shot down by the National Guard on May 4, 1970 when the government felt threatened by the student protests. Crosby, Stills and Nash immortalized the four students in their song, “Ohio.”

I survived The Atlanta Pop Festival of 1969 with 200,000 people in attendance and very little food or water.
“Hey, Judy, we’re driving up to Woodstock next month. Want to go?” my friend asked.
“No thanks.” I was sure I would perish.
When the Bohemian lifestyle landed me in jail, it was time to find new friends. I had dropped out of the University of Georgia on scholastic probation, but I went back to school looking for a husband.
At Georgia State University, I met Bob, a nice Jewish boy. When he wasn’t ready for marriage, I took off for the “Friendly Skies” of United Air Lines in Washington DC.
As a flight attendant, based in Los Angeles and Honolulu, I traveled the world and was introduced to many famous people and different cultures. In Washington D.C. during the Watergate Scandal, I read Bob Woodward and Carl Bernstein, journalists for the Washington Post that landed on my doorstep each day. The following years I moved to L.A. and like many young girls I was star struck.

Me modeling in Newport Beach, California 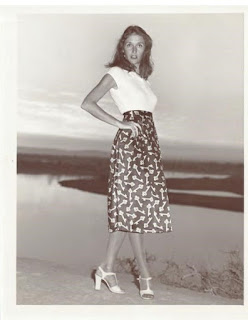 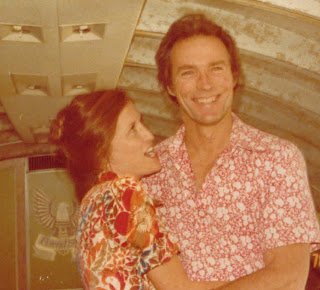 Clint Eastwood and me on United Airlines 747 to Honolulu
Seduced by the movie and beauty industry, I wanted to be a movie star, and I did some
modeling. I went back to school and graduated from the University of California, Irvine, with a degree
in Drama. I performed in Sweet Charity at the Westminster Playhouse with two retired Las Vegas show
girls from Les Folies Bergere who danced in pasties and heavy head dresses for years onstage before
retiring to the stages of Los Angeles. They taught me a lot about dance, as they were more expert than
me and instructed me to just “Sell it.”

"Hey Big Spender" from Sweet Charity
I am on the right. 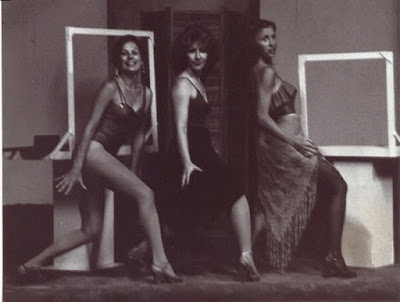 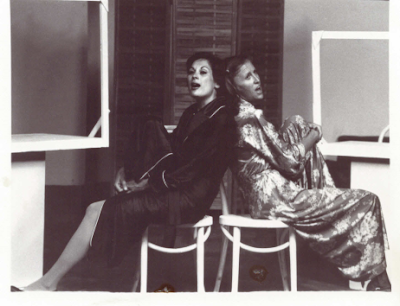 
The pinnacle of my career was acting on TV with Carroll O’Connor in Archie’s Place, at CBS studios. My baby sitter made more money than I did on the set that day. 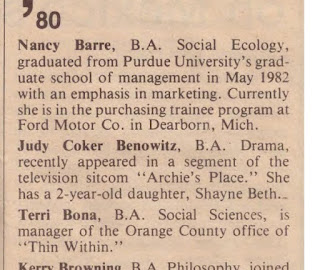 I retired from flying and acting and had three children in seven years after Bob and I eloped in Atlanta with a soap opera playing loudly in the Judge’s chambers. We lived in Newport Beach, California for twenty years and reared our children in the Jewish faith before moving our young family across the country three times. Each move had its challenges. As the children got older, I started acting again with the Pumphouse Players and The Grand Theater in Cartersville, Georgia where Bob and I reside today. 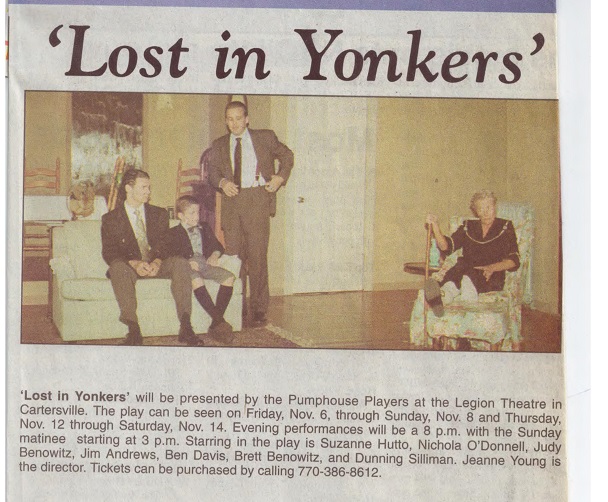 On stage in Cartersville, Georgia with my son Brett. I played Grandma.
I kept a journal for thirty years. When my short story “Nursing Home Cafeteria,” was published in Deborah Ford’s, Grits (Girls Raised in the South) Friends Are Forevah, (Penquin) I took writing more seriously and went back to school for an MA in Professional Writing at Kennesaw State University in Georgia where I graduated in 2017 with a capstone of my memoir, Highway 11.

March 06, 2022
Georgia Journeys  and   Beyond Rosie  exhibits. Judy Benowitz Interview - soar.kennesaw.edu Born in Monroe, Georgia, in 1949, Judy Coker Benowitz was raised by two World War II veterans. Her mother, Ivah Ree Harris Coker, was a WAVE who served in the U.S. Navy in Washington, D.C. Her father, Daniel Coker, served in the U.S. Army, primarily in North Africa. A memoirist and actor, Benowitz discusses the ways in which she has used personal testimony and primary documents to piece ...
Read more